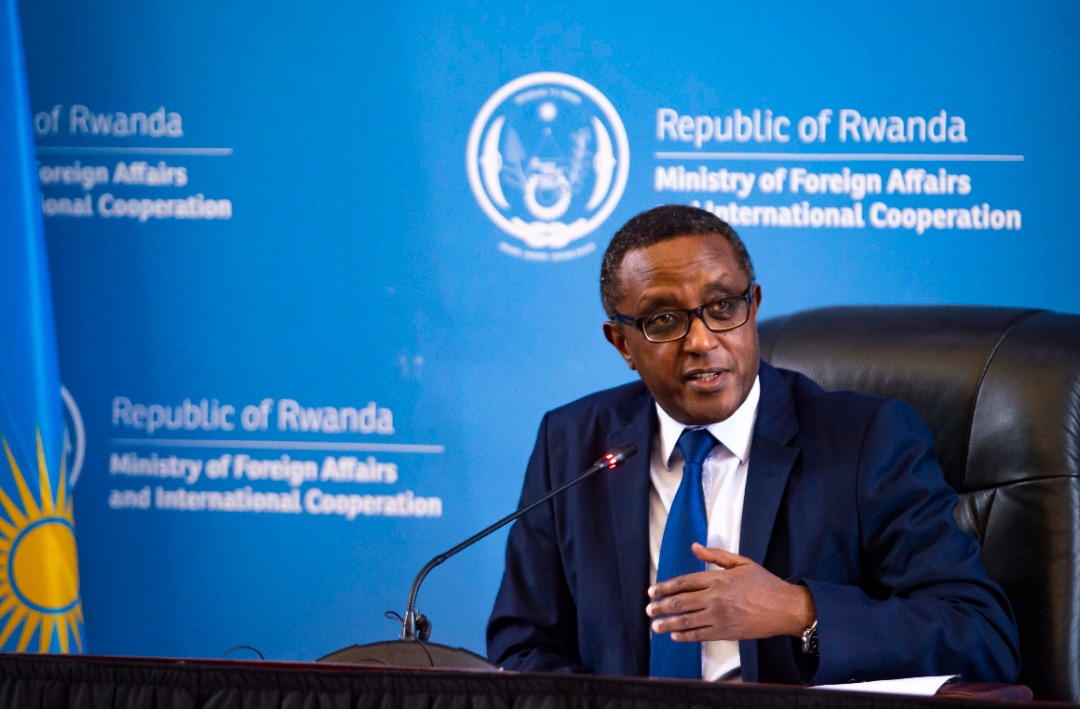 Below is a translated transcript of the interview that the Minister of Foreign Affairs and Cooperation, Dr. Vincent Biruta, had with Radio France Internationale (RFI) on the recently leaked report of the United Nations Group of Experts on the Democratic Republic of Congo (DRC). Dr. Biruta pointed out that the report that Rwanda does not recognize contains biased conclusions that are not validated and ignores the crux of the problem, which is the main cause of insecurity in the region.

The minister said that the visible presence of FDLR and genocide ideology and aggression against Rwanda is not addressed in the report.. LILY

Qn: Rwanda responds to the report of the United Nations experts. According to an investigation leaked to the press this week, Kigali has deployed hundreds of troops to eastern Democratic Republic of Congo since November. The Rwandans are also said to support the M23 rebels. Yesterday on RFI, Christophe Lutundula, the Minister of Foreign Affairs of the DRC, accused Rwanda of having violated the sovereignty of Congo and asks the international community to take sanctions. This morning, response from his counterpart, the head of Rwandan diplomacy, Vincent Biruta. The latter explains that he has not read the report, but he is already expressing doubts about its impartiality.9

How do you react to this UN report?

Dr Biruta: I heard that Rwanda was accused of having intervened with the M23 group in the DRC. I hope the experts were able to base the report on facts, and if the experts only saw Rwandan soldiers, did not see FDLR members, did not mention FDLR collaboration and of the Armed Forces of the Democratic Republic of the Congo. If the drones they used saw Rwandan soldiers and did not identify the artillery pieces that bombarded Rwandan territory from the DRC on March 19, May 23 and June 10. , members of civil society, and by Congolese individuals, there is a problem.

Qn: Using drone images, multiple photos, videos, testimonies, the investigators claim to have solid evidence showing that the Rwandan army has been present in eastern Congo since last November. Do you confirm the presence of your soldiers in the Congo?

Dr Biruta: I confirm nothing. But I say that a report like that, if the experts did their job, they should also have looked on all sides and also seen the collaboration between the FDLR and the FARDC, the artillery pieces that bombarded Rwandan territory from Congolese territory three times. I imagine that the experts were also able to investigate the FDLR, which is the cause of all the problems you see. The M23 I do not believe is the cause of the problems, it is a consequence of the problems of exporting the genocidal ideology by the FDLR who attacked the Congolese populations, targeting particular communities. This is what led to the creation of successive groups one after the other to defend themselves against the FDLR.

In the eastern DRC, there are more than 130 armed groups, the Group of Experts is particularly interested in one of them. They are making huge efforts to connect them to Rwanda, and they think they have discovered something huge. It’s serious, the huge thing that could have been discovered, which is visible, is the presence of the FDLR with its genocidal ideology. It is as if a doctor wanted to treat symptoms without caring about the cause of the disease.

Qn: However, the report dwells a lot on the case of the M23. The report affirms that the Rwandan soldiers support, in material and armament, the rebels of the M23. Is it true ?

Dr Biruta: We will comment on this report on the basis of the elements that are presented in the report, when we receive this report. How am I going to make a decision on the basis of the elements that were presented in this report, which was not officially submitted, but which leaked for reasons known to the experts who organized this leak? It would be dangerous. It would be to venture into speculations which would not necessarily contribute to solving the problem of insecurity in our sub-region.

Qn: The report also shows the collaboration between the Congolese army and various armed groups, that the Congolese soldiers and militiamen fought together against the M23 and the Rwandan soldiers, that the FARDC gave weapons and ammunition to these movements. How do you react to this?

Dr Biruta: We have denounced the collaboration between the FARDC and the FDLR from the beginning and there is proof. That the experts see nothing, that Monusco, which is present all the time on the ground, has seen nothing for 20 years, that’s a problem. It is therefore a report which seems biased and which aims to incriminate Rwanda.

Qn: On this collaboration between the Congolese army and the FDLR of which you believe you have proof, what is Rwanda asking for in this case?

Dr Biruta: We demand that the international community and the Congolese government address the issue of the FDLR and other armed groups that are destabilizing the region. All these armed groups with genocidal ideology and which have a plan to destabilize Rwanda, and to continue or put an end to the genocide which they have not been able to put an end to, according to them. This is our major concern. Until this problem is solved, until the international community and the Congolese government take this problem seriously, relations between the DRC and Rwanda will continue to be tumultuous.

Qn: In this context, are the negotiations with the DRC mediated by Angola dead?

Dr Biruta: No, not dead as far as we are concerned. We are ready to contribute positively to the regional mechanisms that are in place, and I remind you that the Nairobi process has two components: there is a political process and then there is a military intervention, and nothing prevents a process policy is engaged even today, nothing prevents the Congolese government from talking to the various armed groups, including the M23 which signed agreements already in 2013 with the Congolese government, which have not been applied. I will therefore ask that the political process that the Heads of State recommended in Nairobi begin, and nothing can stop it. What is holding it back is perhaps the lack of political will on the part of the Congolese government. I imagine that this political process could also find a solution for the tens of thousands of Congolese refugees who have lived in Rwanda and Uganda for more than 20 years. We deal with the question of the M23 but why did they take up arms again? I remind you once again that the M23 is a Congolese movement composed perhaps of a large majority of Congolese who speak Kinyarwanda, and if they speak Kinyarwanda, it is because of history, it is not we who caused this problem. And so, if we want a lasting solution, we must address all these problems at the root of insecurity in our sub-region.

Qn: For things to go better, the DRC is asking Rwanda to stop violating its sovereignty, to send soldiers to its territory and to support the M23. How do you react to this?

Look, whether it’s 10, 20, 30, it doesn’t matter. I tell you, there are attacks on Rwandan territory from Congolese territory. And there were FDLR who collaborated with the FARDC who infiltrated our territory in November 2021, this is the last attack that killed Rwandan citizens, it is a violation of sovereignty, it is a violation of our territorial integrity, and it is a threat to the security of our country and therefore all of this must be taken seriously. It’s not a matter of ten, twenty, a hundred, whatever.