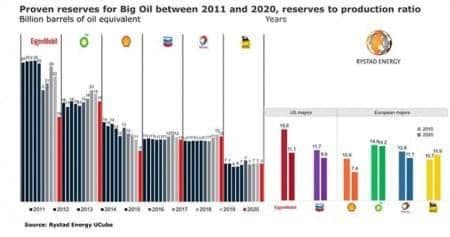 Oil prices appear to have found much needed support and hold above the psychologically important level of $ 80 a barrel just days after a surprise crude build threatened to derail the bull camp. On Tuesday, the American Petroleum Institute (API) reported another week of large crude oil inventories at 5.213 million barrels for the week ending Oct. 8. However, the revelation failed to stop the momentum in oil prices, with WTI trading at $ 81.40 a barrel in Thursday’s intraday session as Brent changed hands at $ 84.10.

Oil prices have now risen by more than 60% in 2021, while natural gas prices in the United States have jumped 131% during the period.

Readers will notice that oil and gas stocks have generally underperformed the commodities they track by a significant margin in the current year. The degree of underperformance becomes even more noticeable when you zoom out for longer periods.

This suggests that oil and gas stocks remain seriously undervalued and could be ready for a catch-up rally.

Indeed, U.S. oil and gas companies are trading at less than half of 2014 levels, when oil prices last exceeded $ 80 a barrel, suggesting they could be seriously undervalued. and ready for some catch-up trade.

Sadly, experts warn that the catch-up trade may not materialize as the fossil fuel industry has a big enemy to contend with: the trillion dollar ESG megatrend. It is increasingly evident that companies with low ESG scores pay the price and are increasingly rejected by the investment community.

According to Morningstar research, ESG investments hit a record high of $ 1.65 trillion in 2020, with the world’s largest fund manager, BlackRock Inc. (NYSE: BLK), with $ 9 trillion in assets under management (AUM), supporting ESG and oil and gas divestitures.

“Energy stocks are nowhere near their 2014 level, when crude oil prices were at current levels. There are some very good reasons for this. One is that it has been a terrible place for a decade. And the other reason is that the ESG pressures to which many institutional managers are subjected lead them to want to underestimate investment in many of these areas. “

Although less often discussed in earnest relative to peak oil demand, peak oil supply remains a distinct possibility over the next two years, primarily due to severe underinvestment in oil and gas.

In the past, supply-side “peak oil” theories have been proven wrong, mainly because their proponents invariably underestimated the enormity of the resources yet to be discovered. In recent years, the “peak oil” theory on the demand side has consistently succeeded in overestimating the ability of renewable energy sources and electric vehicles to replace fossil fuels.

So, of course, few could have predicted the explosive growth of the U.S. shale which added 13 million barrels per day to the global supply of just 1-2 million bpd in just a decade. .

It is ironic that the shale crisis is probably responsible for triggering the peak oil supply.

In an excellent editorial, IHS Vice President Markit Dan Yergin observes that it is almost inevitable that shale production will reverse and decline thanks to drastic cuts in investment and only recover later at a slow pace . Shale oil wells are declining at an unusually rapid rate and therefore require constant drilling to replenish the lost supply.

Indeed, Norway-based energy consultancy Rystad Energy recently warned that Big Oil could see its proven reserves run out in less than 15 years, as volumes produced are not fully replaced by new discoveries..

The main culprit: the rapid decrease in exploration investments.

Global oil and gas companies cut investments by 34% in 2020, in response to falling demand and investors growing weary of the industry’s continued underperformance.

The trend shows no sign of moderating: First-quarter finds totaled 1.2 billion boe, the lowest in 7 years, with successful feral cats reporting only modest discoveries according to Rystad.

ExxonMobil, whose proven reserves declined by 7 billion boe in 2020, or 30%, from 2019 levels, has been the hardest hit after significant reductions in Canadian oil sands and shale gas properties in the United States. United.

With state-owned companies supplying around half of the world’s oil production, the risk of a severe oil shortage is very real.

Reality has already started to strike home in the American shale patch.

According to the latest report from the US Energy Information Administration Drilling productivity report, the United States had 5,957 drilled but unfinished (DUC) wells in July 2021, the lowest for any month since November 2017, up from nearly 8,900 at its peak in 2019. At that rate, shale producers will need to greatly accelerate the drilling of new wells just to maintain the current production clip.

The EIA says the sharp decline in UCRs in most of the major onshore oil producing regions in the United States reflects more well completions and, at the same time, less new well drilling activity – evidence that producers of shale have kept their commitment to drill less. While the higher completion rate of more wells has increased oil production, particularly in the Permian region, the completions have sharply reduced DUC inventories, which could limit oil production growth to United States in the coming months.

But now some oil executives are warning that more shale will be needed to offset normal production declines, and investors will have to accept it.

“Spending in 2022 will need to be higher just to maintain the volumes appreciated in 2021 and I think Wall Street generally recognizes that., “Nick O’Grady, Managing Director of Northern Oil and Gas Inc (NOG.A), told Reuters.

The point is, investments in renewables are simply not growing fast enough to meet global energy demand, and the world will continue to rely heavily on oil and gas for years, if not decades, despite the climate crisis. In progress.

By Alex Kimani for Oil Octobers

Read this article on OilPrice.com