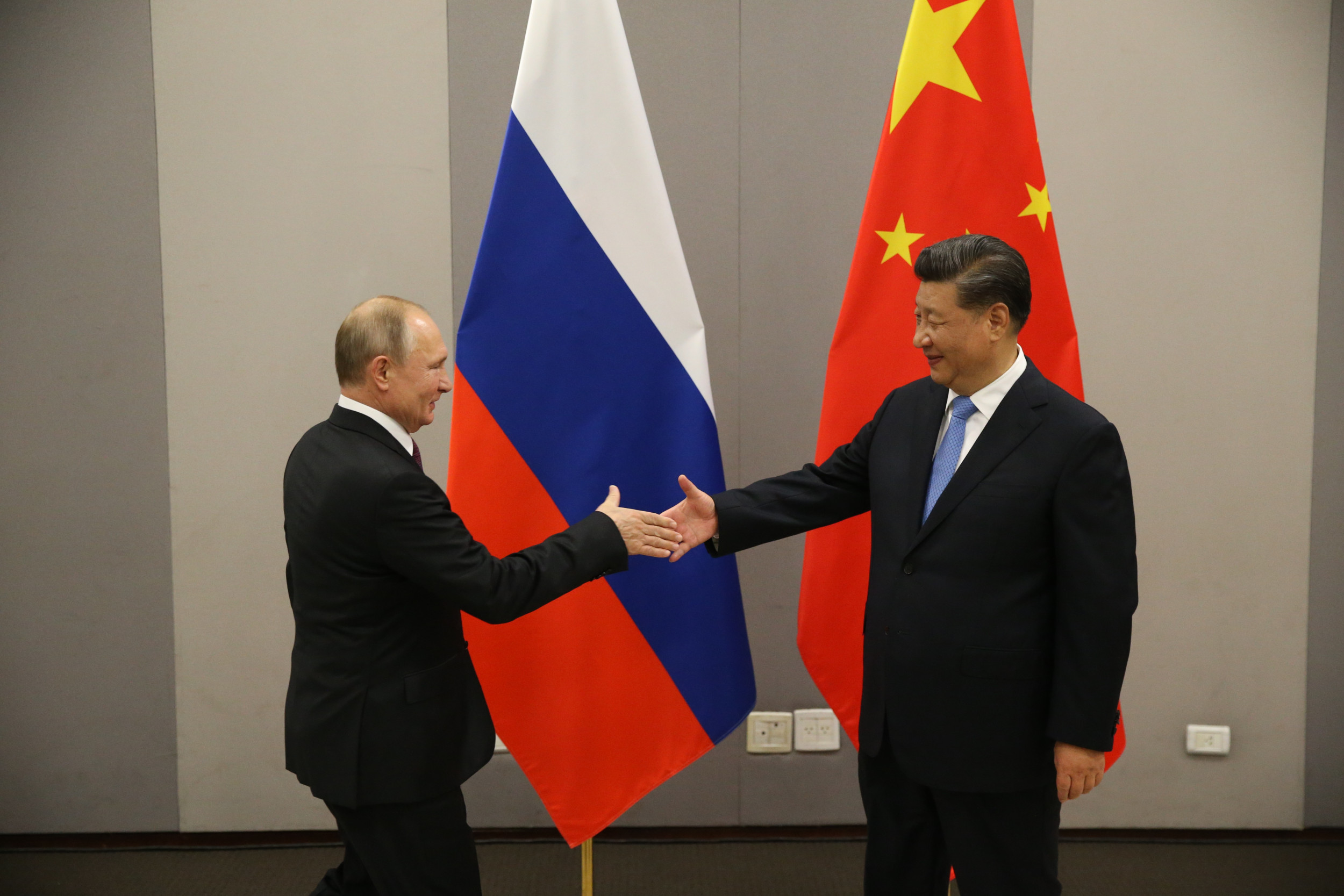 Russian President Vladimir Putin has opened the door to greater cooperation with his Chinese counterpart Xi Jinping, as Moscow’s top diplomat criticized US initiatives in the Asia-Pacific region also deemed provocative by Beijing.

Speaking on Tuesday at a Russia Calling plenary session! investment forum, Putin praised the level of joint work between Moscow and Beijing, saying Russia has “many areas of cooperation with China.”

“One of them concerns our work in third countries,” Putin said. “It’s well advanced, but there is a possibility that it will be further expanded. Why? Because we share pretty much the same approaches and principles.”

And amid international speculation that China’s growing military might, including its nuclear weapons, might worry the Kremlin, Putin said given their increasingly intimate relationship, Russia has no such fears.

“Great Britain, France are announcing their intention to modernize their nuclear arsenals. Are the United States suffering from it and does it concern them? No,” he said. “So why do we have to worry about the growing defense potential of our nearest neighbor, with whom we enjoy an unprecedented level of interstate relations? No, that does not scare us because we ourselves are developing our potential . “

The ability of Moscow and Beijing to expand their efforts to work together has been further elucidated by Russia’s second most powerful figure, Prime Minister Mikhail Mishustin.

“Russian-Chinese cooperation is developing in a complicated international situation,” he said during his 26th regular meeting, held virtually, with Chinese Premier Li Keqiang.

â€œUnfortunately, some of our foreign partners continue to take hostile measures against us, using unfair competition and frequently violating basic standards of the multilateral trading system,â€ Mishustin added. “Russia and China face the challenge of illegal sanctions and political and economic pressure.”

“The best response to this situation will be to bring together efforts in the interest of common development based on the principles of equality, mutual trust and respect,” Mishustin said, then called for “the alignment of projects. underway in the Eurasian Economic Union with the China Belt and Road Initiative, “two international infrastructure initiatives championed by Putin and Xi, respectively.

The official Russian government website also quoted Li as saying that â€œRussia and China are leading and at the same time growing economies, and in this regard, China is ready, together with our Russian partners, to intensify contacts, to improve coordination, to reveal the potential for cooperation and to increase the level of interaction. “

“We are also ready to work together in the fight against COVID-19, to ensure the resilience of global supply and production chains, to strengthen green growth, contribute to the sustainable recovery of the global economy and play a greater role in promoting peace and stability in the region and in the world, â€he added.

Moscow and Beijing have increasingly taken similar positions on geopolitical issues around the world, particularly with regard to opposing what they perceive to be interference from Washington and its allies and partners.

Last week, Russian Defense Minister Sergei Shoigu and Chinese Defense Minister Senior Colonel Wei Fenghe came together virtually to denounce both US military activity near Russia’s borders in Europe from East and near Chinese territory in Asia-Pacific, especially around Taiwan.

Russian Foreign Minister Sergey Lavrov doubled down on Moscow’s criticism of the United States’ conduct in places long considered sensitive for Beijing during a video conference with participants of the science and education program Dialogue for the Future 2021.

“In the Asia-Pacific region, where until recently positive, constructive and unifying trends towards consensus and compromise have prevailed, some countries are introducing patterns of confrontation to deter other countries,” Lavrov said.

Specifically, he blamed the â€œconfrontational patternsâ€ formed outside the Association of Southeast Asian States (ASEAN) â€œuniversalâ€ bloc, including the Quadrilateral Security Dialogue, or Quad, formed by the United States, Australia, India and Japan, as well as the AUKUS Alliance announced earlier this year by Australia, the United Kingdom and the United States Both groups are widely regarded as responses to mutual concerns of participating states regarding China’s vast land claims in the region and its efforts to assert them.

Russia and China staged their first joint patrol in the Pacific Ocean last month, a move that followed joint maritime exercises and a series of other bilateral and multilateral exercises. Russian warships have previously conducted exercises alongside Chinese ships in the Asia-Pacific region, but in 2017, the Moscow and Beijing navies first trained in the Baltic Sea off the coasts of the states. from NATO, Estonia, Latvia, Lithuania and Poland.

Perceptions regarding Chinese activity in Asia-Pacific and Russian activity in Eastern Europe were both taken into account when the Pentagon issued its Global Posture Review, which concluded on Monday.

Mara Karlin, who serves as Assistant Under Secretary of Defense for Policy, laid out plans for an enhanced US military presence in what the Pentagon calls the “Indo-Pacific” region, described as “the priority region” because of “Defense Secretary Lloyd Austin’s Focus on China”.

â€œIn Australia you will see new deployments of rotating fighter and bombers. You will see ground forces training and increased logistical cooperation,â€ Karlin said. “And in fact, more generally, across the Indo-Pacific, you’ll see a series of infrastructure improvements in Guam, the Commonwealth of the Northern Mariana Islands, and Australia. These will include broader things like logistics facilities, fuel storage, ammunition storage, airfield upgrades. “

She also said that the review “strengthens credible deterrence in the fight against Russian aggression in Europe and enables NATO forces to operate more effectively.”

And while Karlin declined to discuss any matter related to Taiwan, with which the United States has only informal relations despite its military assistance, Pentagon spokesman John Kirby said that, with regard to Concerning Ukraine, the United States “would continue to provide security assistance items, both lethal and non-lethal.”

â€œThe relevant Pentagon report fully exposes the true intention of the United States to militarize the Indo-Pacific and do everything to surround and contain China,â€ Zhao said. â€œThe development of China’s national defense forces is entirely linked to the need to safeguard its sovereignty, security and development interests and to maintain international and regional peace and security.

He argued that it is the United States that is pursuing a path of destabilization.

“This is fundamentally different from the US blatant saber strikes in the world, hegemonic and intimidating practices and the disruption of regional peace and stability,” Zhao added. â€œWe strongly oppose the US side’s attempt to justify its measures to increase military spending, expand military reinforcement and maintain military hegemony with theâ€œ Chinese threat theory. â€The US side should give up the Cold War mentality of creating imaginary enemies and stopping words and actions that threaten international peace and security. â€

Moscow has also rejected claims from Washington and Kiev about a build-up of the Russian army near the border with Ukraine, where war continues between security forces and Eastern separatists accused of receiving support from Russia. Putin said on Tuesday that it is those living in the two unrecognized separatist republics who face “constant threats” and that the Kremlin too “is to some extent concerned about the large military exercises being carried out near its borders.”

These exercises include those carried out “most recently in the Black Sea, when strategic bombers flew only 20 kilometers from our border, armed with precision weapons and potentially nuclear weapons,” Putin added. “All of this poses a threat to us.”

Lavrov also warned that “significant military units and equipment from NATO countries, including those of the United States and the United Kingdom, are being deployed closer to our borders,” and suggested that Ukraine could prepare for an attack.

“In Ukraine itself, near the line of engagement in the Donbass, more and more forces and equipment are being accumulated with the support of the growing number of Western instructors,” Lavrov said. “Heavy weaponry, including drones, directly banned by the Minsk accords, are being used against Donetsk and Lugansk. We simply do not have the right to exclude the Kiev regime from launching a military enterprise.”