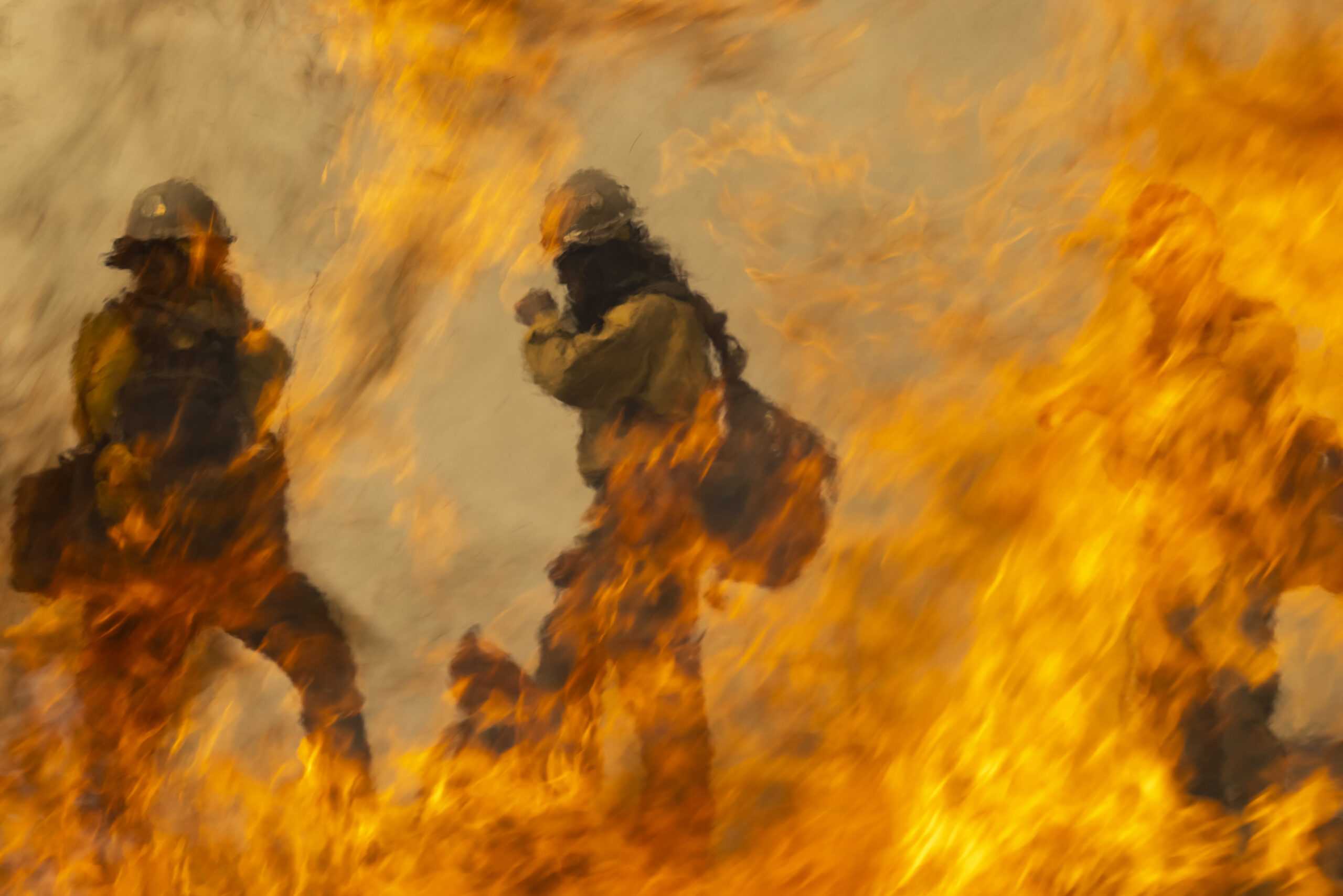 When wildfire season erupted in New Mexico in mid-April — even earlier than usual in our warming world — firefighters responded to calls for help. They showed up across the state to race against dry winds sending flames into the mountains, along the Rio Grande, through neighborhoods and across ranches.

Some of the men and women who came forward work for local municipalities, small towns and counties. The Albuquerque Fire Rescue Wilderness Task Force, for example, fought 16 wildfires and brush fires in the city and also assisted in the Big Hole, Hermits Peak and Calf Canyon fires, sending 70 members of crew. New Mexico State Forests and agencies like the U.S. Fish and Wildlife Service are also helping to fight the fires.

But the majority of people who show up when New Mexico ignites work as federal firefighters. As warming accelerates drying in the already arid Southwest, the fire season in the western United States has lengthened and the fires have grown larger.

“Over the past four decades, we have seen the annual area burned [in the western U.S.] increase by more than 300%,” bioclimatologist Park Williams said in an interview last year. “Over 300% means three to four times more land burned today than you would expect in the 1970s or 1980s.”

“This trend [of larger fires] was already worrying 10 years ago,” Williams said in 2021. “What we have seen over the past two years is truly mind-blowing.

The trend is also taking its toll on the federal workforce facing these disasters.

Former wildland firefighter Kelly Martin spoke of California’s increasingly severe fire season last year, driven, like New Mexico’s, by dry, overly dense forests: “That should really bode well for us. what the years will look like,” she said. “And we cannot continue to operate with the same antiquated system that we developed 50 years ago”

Martin, who worked as a wildland firefighter for 35 years for the Forest Service and the National Park Service, now runs a nonprofit organization, Grassroots Wildland Firefighters. When she started working in the 1980s, federal firefighters were racking up maybe 400 overtime hours during a summer season.

“Now we see people regularly working a thousand, 1,500 [hours]. And I think I’ve even heard that there are people working almost 2,000 overtime hours a year,” she said. “This constant immersion in an emergency mode is really having a huge impact on people’s mental health and well-being – not to mention their physical well-being.”

If a longer fire season with more complex blazes isn’t enough, the workforce is in “crisis mode” due to attrition, federal wildland firefighter Marcus Cornwell said.

“We have fewer firefighters in the field at our federal levels because the pay and benefits are not adequate,” he said during an interview in early September 2021, in which he, Martin and the former Forest firefighter Jonathon Golden described the toll as a perpetual fire. the season takes people.

I would say that we are really approaching a train accident, a serious problem where the firefighters are tired, they are mentally and physically tested in a way.

In 2021, Congress approved a wage increase for entry-level jobs, up to $15 an hour. From mid-Februarythis salary increase had still not affected many firefighters. An update from the US Forest Service at that time, the agency hoped to raise salaries by the summer. The Forest Service also said it was trying to identify seasonal firefighters to convert to full-time.

As it stands, these jobs are classified as temporary, even when the fire season lasts most of the year. About three-quarters of federal smokejumpers and hotshots – named “hotshot” crews in the 1940s because they work in the hottest parts of the fires – are considered temporary employees.

This means the bulk of federal wildland firefighters lack benefits such as retirement and access to affordable, reliable health care. Many end up living in their cars, Cornwell said, when there are no quarters for the crew.

“As soon as the season is over, they have virtually no ability to access mental health care benefits, to deal with any kind of long-term physical issues that they have,” Cornwell said. “You know, once they’re fired and if their fire family isn’t there to support them, they have no benefit.”

For many, life doesn’t get any easier once they put out the flames. Reintegration into family life, life without fire, especially when the cycle of fire accelerates, can be difficult.

During fire season, people miss important events, birthdays, anniversaries – even the birth of their children.

“When it continues, it becomes a real struggle, and sometimes we are able to successfully bury or suppress those memories,” Golden said. “But he comes out in the winter. People turn to alcohol or drugs.

We have lost partners and friends to suicide. It’s a real issue within the community that frankly I think isn’t talked about enough or addressed the best it could be.

Cornwell said he was worried about recruitment for the coming season: “Ten, 15 years ago we would have 400 or 500 applicants for an entry-level firefighter position on some of the teams I worked on. Now we’re lucky if we see 50. With those kind of numbers, we’re headed for a train wreck, where once there’s a town here in New Mexico calling for federal help, the federal aid. And guess what? No one is going to show up.

Since the beginning of the year, the firefighters have intervened. But we cannot look away from the crisis.

We know why the climate is changing. Humans pumped greenhouse gases into the atmosphere and continued to drill and emit at a rapid rate, despite recognition of the need to drastically and immediately reduce emissions to avoid the worst consequences of climate change.

And while we may not be able to pinpoint the exact day the switch flips — when we irreversibly step into a world we’re not ready to handle — Friday, April 22 provided a glimpse. of what this world looks like.

With 20 severe fires burning in 16 counties brought on by high temperatures, low humidity and high winds, hundreds of New Mexicans have lost their homes, thousands more have been evacuated. These huge, burning fires also affect watersheds, forest ecosystems, and plant and animal species. In our warming world, some coniferous forests never recover, instead turning into scrubland or nurturing other types of trees, including invasive species. We see this happening in places like the Jemez Mountains, where the impacts of the 2011 Las Conchas fire are large and long-lasting, and where the Cerro Pelado fire is burning right now.

Even those of us who were away from the fires that day were scared. The day’s winds fanned the flames, and also caused dust storms, damage and deep anxiety.

But there is still time to make choices that can avoid further warming and change. And there’s still time to take care of each other, including those with the toughest jobs.

Being a wildland firefighter is fulfilling, Cornwell said. “It’s a public service that I think a lot of us are happy to do at the end of the day.” But things can’t go on like this: “We need more money. We need better programs. We need more support.

“The Longest Season: An Our Land Wildfire Special” is available to watch online. You can also watch the full interview with Cornwell, Martin and Golden on the PBS video app.

This story was originally posted by Source New Mexico, which is part of States Newsroom, a grant-supported network of news outlets and a coalition of donors as a 501c(3) public charity. Source New Mexico maintains editorial independence. Contact editor-in-chief Marisa Demarco for any questions: [email protected] Follow Source New Mexico on Facebook and Twitter.