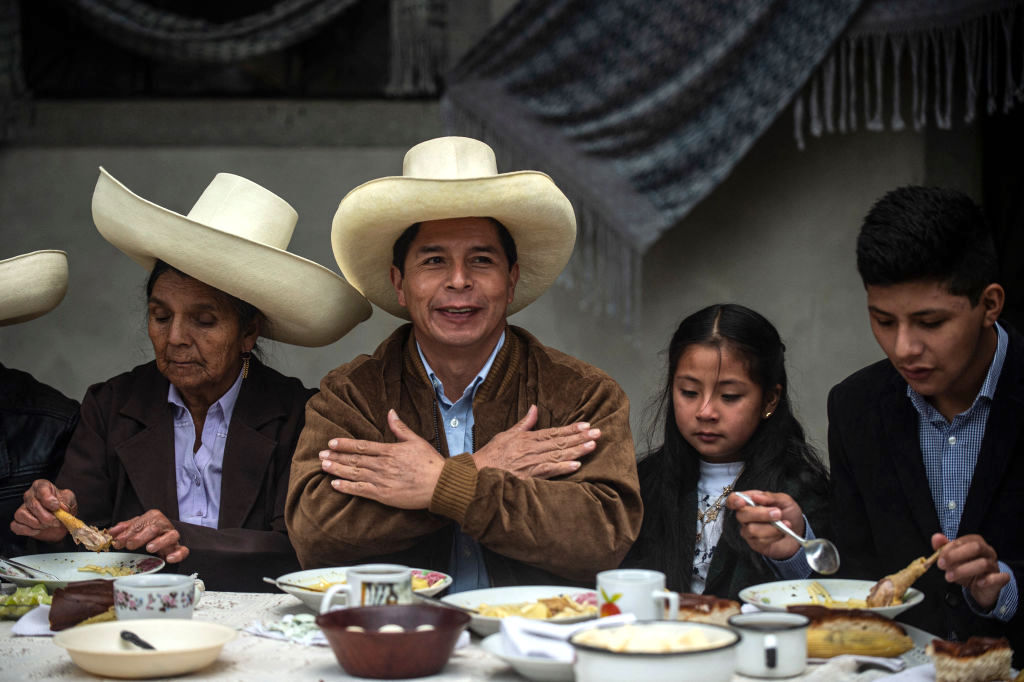 I think the Peruvian right – basically Fujimorismo – really needs a closer look, because in many ways its combination of far-right populism and neoliberal economics was the forerunner of what happened later. with numbers like [Jair] Bolsonaro. And for a while, Fujimori was actually quite popular, not only among the upper classes but also among the poor in the urban fringe.

After running as an anti-neoliberal candidate against Vargas Llosa in 1990, Fujimori adopted Vargas Llosa’s neoliberal economic adviser Hernando de Soto and implemented the IMF’s standard package: deregulation, privatization, liberalization, etc. As in the rest of Latin America, these austerity measures – known in Peru as the “Fuji shock” – ultimately stabilized inflation and brought some degree of macroeconomic prosperity. Peru was for some time the fastest growing economy in the world.

With a massive influx of foreign investment, Fujimori’s economic adviser, de Soto, gave neoliberal policies a ‘populist’ turn by eliminating market regulations and essentially allowing the new urban poor – many of whom came from the countryside. as refugees from the Shining Path conflict – precarious “property class”. De Soto’s theory was essentially that Third World poverty was the result of strong “benefactor states” not allowing the poor to capitalize their assets, to take out credit on a fruit stand, a delivery service, the informal real estate, whatever. It has become a kind of “neoliberalism from below” and it has paid important political and ideological dividends.

While all of this was going on, the conflict with the Shining Path took on greater significance (ironically, the Shining Path’s activity was actually in decline at this time). Fujimori capitalized on the popularity of his economic policies to dissolve Congress and establish a presidential dictatorship, essentially in the name of waging a victorious war against the Shining Path, which previous administrations had failed to contain. He effectively “won” this battle, while also sponsoring widespread human rights violations, forced sterilizations and paramilitary death squads.

So overall, the Fujimorismo of the 90s is a political project combining the most undemocratic aspects of technocratic neoliberalism and the more undemocratic traditions of military dictatorship, injected with a kind of market populism that for a time , gave his government a sort of plebiscite legitimacy.

Keiko Fujimori has essentially been the keeper of this legacy, adapting it to the current democratic rule of law from his seat in Congress. But if you ask the lowliest Peruvians on the streets of Lima, many of whom have supported Alberto Fujimori, they will likely tell you that Keiko is not so much a politician as he is a leader of an organized crime syndicate. She is deeply unpopular and, while the authoritarian side of Fujimorismo has already fallen into disrepute, it is argued that the economics side of this project is also falling apart. There is a growing sense that corruption – synonymous with Keiko in particular – is a problem built into the economic system.

As to the question of why anti-Communist rhetoric still reigns in national politics, I think it would be a mistake to confuse it with support for Fujimorismo or any positive neoliberal project. I think anti-communism in Peru – and this is perhaps true for most Latin American countries – has to be read through a colonial lens, where it is not only class but also racial anxieties that are stake.

Just take the term “terruco”: a ubiquitous pejorative used in the media to denigrate leftists as “terrorists” associated with the Shining Path (hence the “terr-“). This same word has also been used historically as a racial epithet for the indigenous peoples of the Andean regions, so there is a fairly obvious amalgamation of neocolonial racism and Cold Wa style anti-communism which, strangely, is not often recognized in the world. Peru.

If you ask the humblest Peruvians on the streets of Lima, many of whom have supported Alberto Fujimori, they will likely tell you that Keiko is not so much a politician as he is the leader of an organized crime syndicate.

I think it’s worth mentioning all of this because it shows why Castillo – as an indigenous and leftist – really outraged the conservative urban sectors of Peruvian society. At the same time, this should not be interpreted to mean that anti-communism is somehow immutable or will always be politically effective. Thea Riofrancos has written some interesting things about how the pink tide could rebound if an alliance can be forged between what has become competing left-wing visions of sovereignty – self-sufficient indigenous resistance against national and popular anti-neoliberalism.

I think the same is true of defeating the far right: behind its rabid anticommunism hides a completely fractured notion of who is or represents the nation, and the left in a sense has the possibility – in Peru and elsewhere – to through alliances and new policies to re-articulate who the people are.