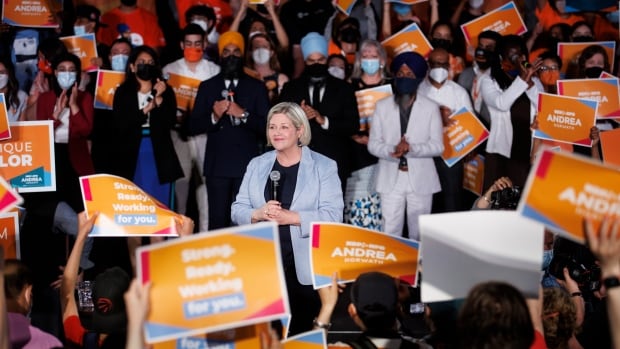 Ontario New Democrats pledge to run bigger deficits than Progressive Conservatives and Liberals if elected and likely won’t balance the budget for six years, but party eyes savings by canceling a reduction in the gas tax.

This commitment is expected to save $600 million in the first year by reversing the Progressive Conservative government’s decision to reduce the provincial portion of the gas tax by 5.7 cents per liter for six months starting July 1. .

Catherine Fife, who served as the NDP’s finance critic, presented the costs on Sunday and acknowledged the high cost of living, including rising gas prices that topped $2 a litre, but said the temporary Tory cut was just a “trick”.

“We are looking for a long-term sustainable strategy to alleviate gas prices, but also to stabilize them,” she said, underlining the party’s promise to regulate gas prices.

“When I talk about these things at the door, people say, ‘Well, why doesn’t the government tackle the main problem, instead of, you know, $12 a month or covering the cost of half a tank of gas? “‘

New revenue streams in the NDP Costs released today include a $1.9 billion gain by year three from increasing the capital gains inclusion rate from 50% to 100% on corporations, excluding small businesses, and individuals with a net worth of more than $3 million – with a principal residence exemption in place.

They’re also betting on nearly $600 million by year three from raising taxes on people earning over $220,000 by one percentage point to two percentage points for earnings. more than $300,000, and $2.4 billion thanks to the increase in the corporate tax rate from 11.5% to 13%. % from the second year. The small business tax rate would be maintained.

The party is also reportedly reallocating billions in contingency funds after the auditor general reported that the PC’s recent budget was a higher than usual amount.

The biggest spending in the NDP plan includes $8.6 billion by year three to double payment rates for social assistance and disability assistance, a promise made Saturday following criticism that the original plan to increase rates by 20% was too low.

The plan calls for a deficit of $21.5 billion in the first year

An NDP government would also send $1.8 billion in revenue from a proposed cap-and-trade system to rural, northern and low-income families, spend $940 million in the third year to enact universal coverage in mental health and $834 million in year three to restore the former Liberal government’s free post-secondary education program for low-income students.

It all adds up to a plan that would see a deficit of almost $21.5 billion in the first year – higher than the Progressive Conservative plan’s $19.9 billion – followed by an 18.4 billion deficit. billion in year two and just over $13 billion in year three.

The costing document doesn’t go beyond a third year as party officials say projections are getting “fuzzy” but they expect they could even out in 2028-29.

Fife said it was important to spend now, coming out of the pandemic which has exposed cracks in the education and health systems.

“People are hurting,” she said. “People can’t afford to wait any longer. They need a government to show up for them and (NDP Leader Andrea Horwath) has been very clear about that: We’re not going to ask people to wait any longer.”

The NDP cost comes 20 days after the party released its platform, excluding finances, and 17 days after the PC government’s budget on which New Democrats said they should base their calculations.

The party says its plan would protect middle-class families from higher taxes and fees, ensure the wealthiest people and businesses pay their fair share and improve lives for everyone.

The New Democrats have proposed a “Green New Democratic Deal”, their environmental plan which they say is a stand-alone plan, funding the pledges through revenue from a cap and trade pledge system.

A projected $4.6 billion by the third year of this system would be spent on home energy retrofits, cover half of municipalities’ net transit operating costs and a rebate for electric vehicles, as well as a quarter of the money to residents disproportionately affected by carbon pricing. .

In addition, their promise to increase home care services would cost more than half a billion dollars a year, in addition to spending about an additional $1 billion by year three on caregiver benefits, a grant program for home security for seniors and increased salaries for personal support workers.

Hundreds of millions of dollars are also pledged for affordable housing, rent subsidies, higher wages for early childhood educators, and the hiring of more teachers, teaching assistants and babysitters.

The NDP has said it will maintain the overall infrastructure spending pledged by the Conservatives, but redirect any money earmarked for Highway 413 and the Bradford Bypass, which they oppose, to school capital projects and Health care.