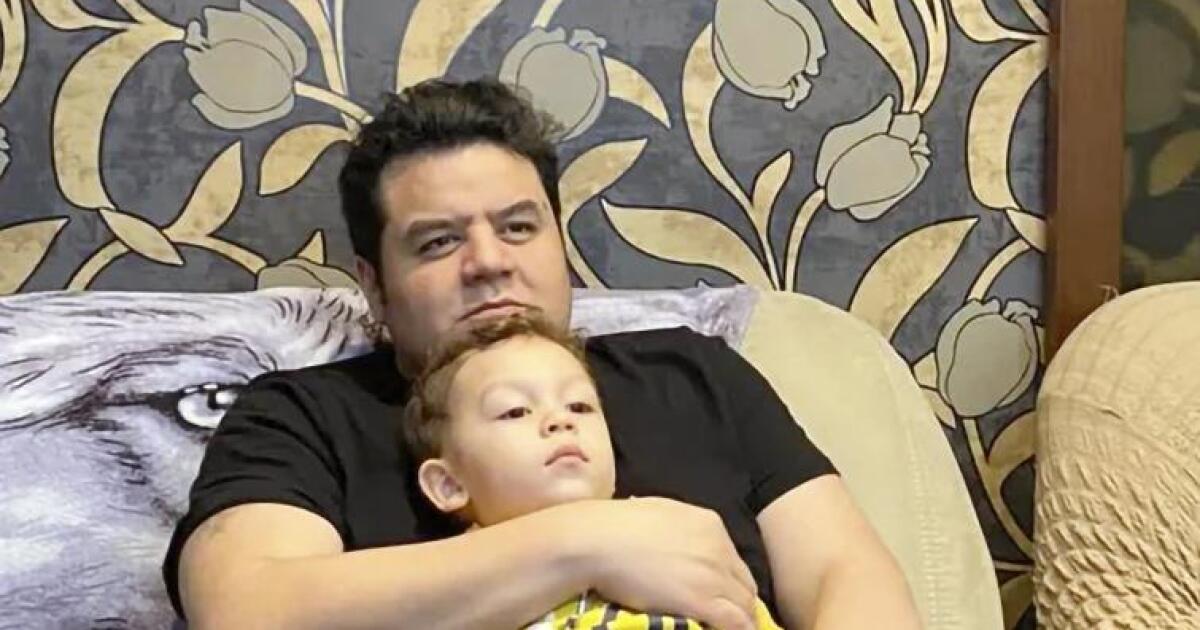 Russia was massing troops on the border with Ukraine when an increasingly desperate Cesar Quintana visited the US Embassy in kyiv in December to plead for a passport for his son in toddler, who had been abducted from their Southern California home a year earlier by his Ukrainian-American mother.

Quintana has obtained a US court order stating that he has sole legal custody of 2-year-old Alexander. He got the passport, bought plane tickets and a few days later went to the airport for a flight home.

But they never got on the plane. Police who he says were summoned by Alexander’s Ukrainian grandmother – the mother of Quintana’s ex-wife – ordered the boy handed over to them.

Today, three months later, Ukraine is ravaged by war. The town of Mariupol where Alexander lived with his mother at his grandmother’s is under siege. Quintana, who is back in the United States, has lost contact with them and is so distraught that he plans to go to the war zone to find his son.

“I’m ready for anything and everything,” Quintana told The Associated Press. “I just want my son back.”

Quintana, 35, said he last spoke with Alexander on FaceTime on March 2. He said he sent money to his ex-wife, Antonina Aslanova, for supplies, but never heard back.

Communications were cut in Mariupol due to the Russian bombardment, which this week included an airstrike that destroyed a theater used as a bomb shelter by hundreds of civilians. Tens of thousands of people fled the city and an unknown number were killed.

AP efforts to reach Aslanova were unsuccessful. Emails and LinkedIn messages were not returned. She currently does not have an attorney in the California child custody case, and a US phone number she provided to the court did not work. A message was left on another phone listed under his name.

Andrew Klausner, who was Aslanova’s divorce attorney when she previously requested and was denied a restraining order against Quintana, said he has not had contact with her since fall 2020 and did not know that she had left the country.

Quintana has implemented a website about his fate and traveled to Washington, DC, this week to try to enlist the help of members of Congress and ask Ukrainian diplomats in the nation’s capital for permission to enter their country.

The State Department declined to comment on the matter, but wrote in a Feb. 15 letter to California U.S. Representative Lou Correa’s office that when Quintana attempted to return his son to his Orange County home in December, he did not have the consent of the boy’s mother, nor the approval of the Ukrainian authorities overseeing the custody fight there.

“Although a left-behind parent in the United States may have custody or visitation rights under a U.S. custody order, that order may not be valid and enforceable in the country where the child is located,” wrote April Conway, the branch of the department. head of the office for children’s issues.

The letter also said State Department officials were asking Ukrainian officials why a critical court hearing in February on the boy’s case was postponed until late March.

International parental child abduction cases are complex, and advocates say relatively few children abducted from their country of residence are returned. But the stakes are even more complicated for Quintana’s son since the embassy in kyiv is closed because of the war and the State Department said it can assist US citizens with consular services once they leave Ukraine and travel to another country.

Noelle Hunter, co-founder of the iStand Parent Network, said her group wanted to draw attention to Quintana’s case so that US government officials and nonprofit groups can intervene quickly once the fighting subsides. Hunter’s daughter was taken to war-torn Mali and she was able to bring her home with the help of US officials in 2014.

Many of the details of Alexander’s case are set out in a September letter from Assistant Orange County District Attorney Tamara Jacobs to Ukrainian officials.

Alexander was abducted in December 2020 while Quintana and Aslanova were divorcing, according to the letter. Quintana was granted custody of Alexander after his arrest for a driving under the influence investigation.

Quintana said he allowed Aslanova to visit their son at his home as Quintana recovers from gallbladder surgery. He said he fell asleep and when he woke up in the afternoon, she and Alexander were gone.

Quintana texted Aslanova and said she was not allowed to leave with the boy; she replied that they were in a store. Quintana called the police, who told her the next day that Aslanova and Alexander had flown to Turkey and then to Ukraine, according to the district attorney’s office, who charged her with child abduction.

In March 2021, a California family law judge ordered Alexander’s return. “The court found that there were no pressing circumstances for the mother to have taken the child and that the taking was wrongful,” Jacobs wrote in the letter.

That same month, Aslanova filed a statement with the court in her DUI case saying she had no plans to return to the United States.

In the meantime, Quintana obtained a visa and traveled to Ukraine, where he hired a lawyer to try to get his son back. Quintana said he stayed in contact with Aslanova, provided financial support for his family, and once in Ukraine he was allowed to visit the boy.

Quintana said he tried to convince Aslanova to let him bring their son back to California and that she would also have to come back to deal with her legal issues. He said in a phone call in November that she eventually consented and told him that his mother, who was caring for their son, would bring Alexander to her hotel in Mariupol.

As soon as he had the boy, they left by car for kyiv. Quintana said he was arrested twice by police during the 14-hour trip. Authorities confirmed he was the boy’s father and allowed them to proceed but took their US passports.

In Kyiv, Quintana went to the US Embassy to get new passports. He said authorities there required more than a temporary custody order to issue the boy a passport, so he wrote to California Family Court asking for an order for the document. He said he was worried about a possible Russian invasion.

“If this happens I am afraid of Alexander and I will not be safe and US flights to Ukraine will be canceled for an unknown period of time,” Quintana wrote. An order was placed and the passport issued.

He and Alexander spent Christmas together and planned to return to the United States before the New Year. He said he spoke with Aslanova on the phone and she asked him not to leave her behind.

But Aslanova’s mother, he said, did not want the boy to leave and filed a complaint against Quintana with the Mariupol police. He said she was accompanying the police when they arrested him at kyiv airport. Police showed him a document written in Ukrainian – which he does not understand – and threatened to arrest him if he did not hand over the child, Quintana said. Her son became distraught, Quintana said, so he gave it to his grandmother to avoid further stressing the boy.

Quintana provided a copy of the police document to the AP, which hired a translator to read it. The document alleged that Quintana took the boy from his hotel in Mariupol in late November without the permission of the child’s mother and called for an investigation to determine whether Quintana was legally authorized to take the boy.

As he returned his son, Quintana said he hugged Alexander and said, “Goodbye for now, my son, but I won’t give up. I will take you home.

Quintana said his Ukrainian lawyer told him the document was a pretext to prevent him from leaving. He said he stayed in Ukraine until the end of January, but left when he was denied a visa extension. He said he hoped to get his son back after an international parental child abduction hearing scheduled for February, but was postponed until March.

Then the war broke out. Quintana’s Ukrainian lawyer is now in the army to fight the Russians.

Quintana said he would do anything to bring Alexander to the United States. He said he told Aslanova he would help her with a lawyer for her DUI case if she returned. He said he would even help sponsor his mother to join him in America.

He plans to buy a ticket to Poland next week and may try to enter Ukraine from that neighboring country.

“I don’t really know what I’m going to do, but I just want to be there if an opportunity arises for him to leave the country,” he said.